The two headed to Switzerland directly from 2018 UCI mountain bike world championships, held in Lenzerheide, Switzerland. Smith had just finished 6th, her best major international result to date. It caps off a year of impressive results from the Canadian.  starting with a bronze medal at the Gold Coast Commonwealth Games in Australia, Smith moved steadily up the World Cup standings all season, breaking into the top-1o for the first time at home in Canada at the Mont-Sainte-Anne round.

Pendrel’s year, on the other hand, was disrupted when a broken arm sustained in training put a temporary halt to her World Cup campaign. The world champion and Olympic medallist mounted an impressive comeback from the mid-season injury. Pendrel rode right back into the top-15 at Mont-Sainte-Anne, the second last World Cup of the season. In Lenzerheide, she was riding in the top-10 with just over a lap to go when a untimely flat tire slowed down her comback run.

A week after racing together as part of the larger Team Canada squad in Lenzerheide, Smith and Pendrel partnered up for the 2018 Perskindol Swiss Epic 2018. The mountain bike stage race pushed riders through 12,000m of elevation gain over five stages. All starting high up at ski stations and mountain towns. I talked to the winning duo about Canada’s excellent performance in Lenzerheide, and the challenge of taking on such a big effort just days after world championships.

Canadian Cycling Magazine: Let’s start with worlds. Congrats to both of you on excellent results – three Canadian women in the top-15, and several more not too far behind, is a great result for Canada. What do you think makes our country women’s XC team so strong?

Haley Smith: There are a lot of things that contribute to this, I think. Our national team program is great and we have a lot of resources available to us, including world class coaching. We also have some of the most demanding and extensive trail systems I’ve seen anywhere in the world. On a personal note, I’ve had incredible female role models to look up to in the sport (including Catharine) who have shown me what is possible for Canadian women to achieve.

CCM: Sixth at world championships is a career best for you. You’ve been moving up the World Cup standings all season to get to that result. What happened this year, and during that final race that led to such a great result?

HS: To be honest, I don’t know that I can nail it down to a concise answer. I’ve been working hard for many years waiting for a breakthrough, and it all just seemed to start coming together this year. My coach nailed the timing of my peak and taper, so I was really fresh and ready to go for Worlds – and I was definitely really excited! I’ve also been doing a lot of work with my mental performance coach (Sharleen Hoar), which has helped up my game beyond the fitness and physical skill elements. But most of all, I think, is just the time and effort put in over several years, slowly building my capacity and self-belief. There is no secret! 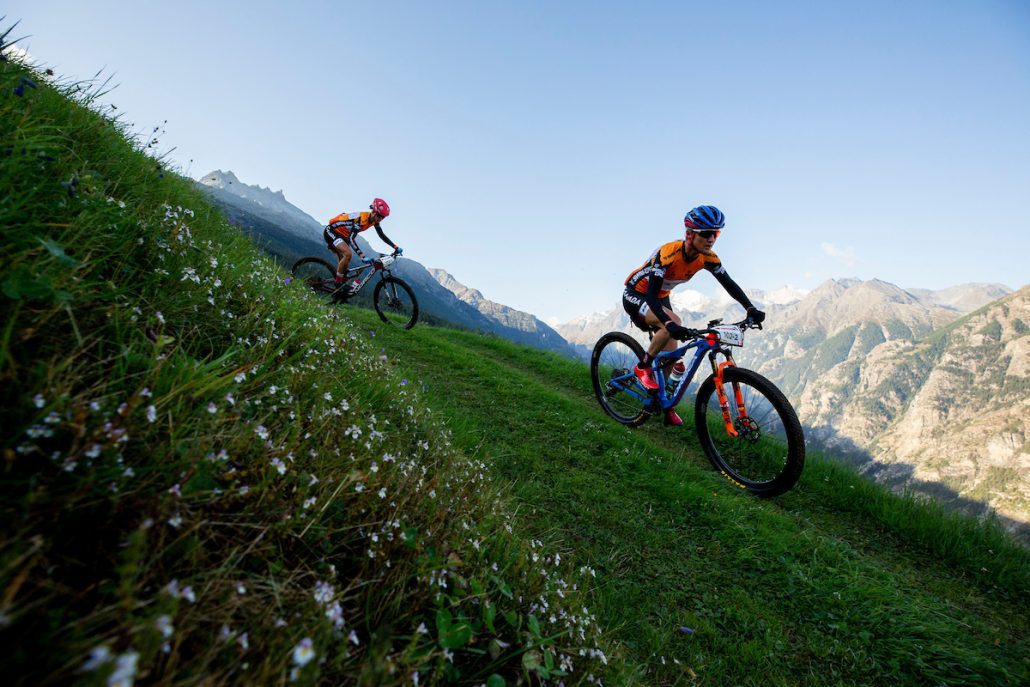 CCM: After a strong start to the season you had a big setback with your broken arm. When that injury happened did you think a result like this – riding in the top-10 at world championships before your flat tire – would still be possible?

Catharine Pendrel: I was certainly hopeful! I think it was really important for me to get back early before MSA so I could fine tune for worlds. MSA was a bit of a shock in how much high end fitness I had lost.

CCM: How do you stay motivated through a substantial injury like that during the middle of the season?

CP: You definitely go through ups and downs, but racing is a choice and there is nothing like being forced out to show you how much you want to get back at it and how hard you are willing to work to get there.

CCM: This year you founded Pendrel Racing, along with your husband Keith Wilson. All three of the team’s riders represented Canada in Lenzerheide. What was it like being there as your team competed?

CP: It was pretty cool! Making it to worlds to represent Canada is a huge deal and all of them raced so well. I was really happy to see them achieve their personal goals this season and am excited to continue watching their progression.

CCM: Last year you did the Crocodile Trophy – a multi-day stage race in Australia after Cairns World Championships. This year it’s the Swiss Epic. These aren’t exactly casual scenic rides. What motivates you to take on these very difficult races when most racers would rather be relaxing poolside?

HS: I’m really motivated by adventure and challenge. For the most part, I love riding my bike and it doesn’t feel like work. I don’t often feel like I need a mental break from it (although I do take a few unstructured weeks throughout the year). Things like Croc and Swiss Epic give me this amazing opportunity to see the world and push my limits in an unconventional way. These events are just so fulfilling on a raw, primitive level – you’re out there, suffering, living, and it’s just such a rewarding experience.

CCM: How is the switch from the shorter, all-out effort of an XCO to long, three to four hour efforts, day after day?

HS: It is a bit tough to find your groove at first. You do question how hard should you go (or how hard you CAN go without blowing up), but we have a ton of experience with long, hard training days, and so we’re not completely out of our element. I think the key is finding the “red line” and then being diligent about not going over it too much.

CP: Even though I was confident in my training it is still intimidating to push yourself that hard for that long, especially at elevation. I underestimated my nutrition the first day and that wasn’t a fun final climb, but we started using power as a guide to help us…. our heart rates had already dropped by 10 beats after day 1, and that really gave us something concrete to focus on. We discussed strategy each night and re-evaluated each day in the race by how we felt. That usually ended up with us just going for it all the time! Everyday you have a moment of “I don’t think I can hold this”, but you just turn your mind off and keep pushing and it’s amazing what you can do. Haley was so strong it was really motivating to keep pushing. 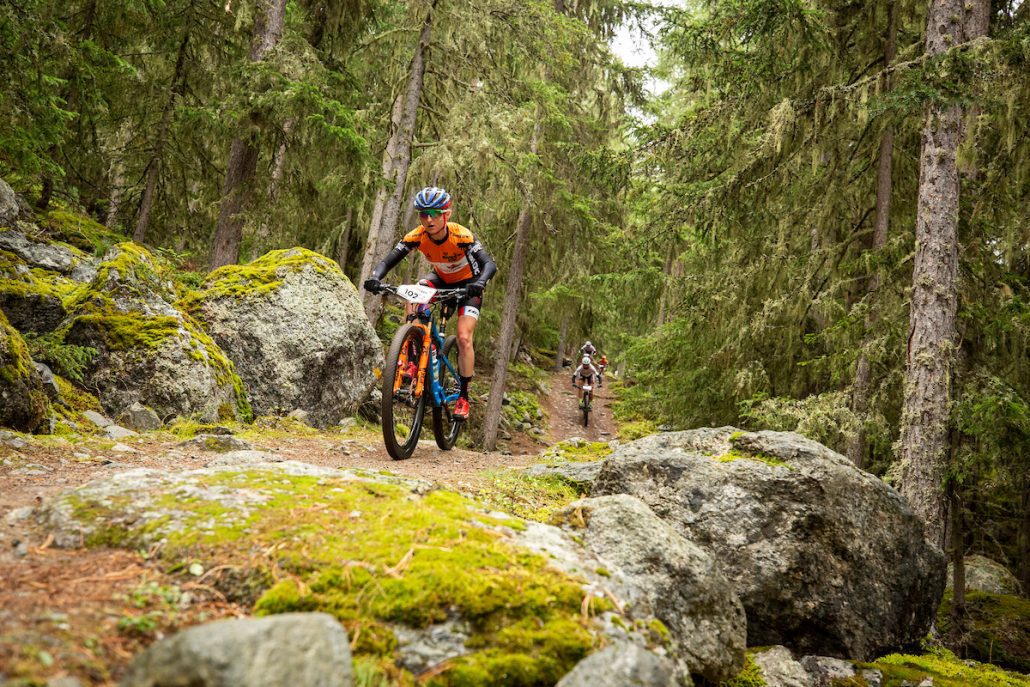 CCM: After spending most of the year racing against each other at World Cup’s and at home in Canada, what’s it like to team up and race together for a week?

HS: Dan always says that at World Cups and Champs we’re there to race the rest of the world and not each other. At the same time, we are competitors for most of the year. Chasing Catharine is fun and I know that that pursuit is a huge part of the reason I’ve gotten faster. I have an immense amount of respect for Catharine, and so getting to team up with her is pretty cool! Yes, we’re competitors, but I think it’s a healthy relationship and a positive one. She makes me go faster (and maybe I do the same for her!)

CP: I never go to World Cups to beat the other Canadians, I go to race as fast as I can. It’s motivating for me to have Canadian racers coming up because it means we are doing something right and to be able to team up with another Canadian to show what a force we are was pretty cool! I have a lot of respect for Haley and all of my competitors and I think this respect is what keeps you improving.

CCM: What’s next? Do you go straight back into training when you get home? Maybe some time off? Or are you going to find an even harder challenge to finish off the year with?

HS: My season ended with the finish of Swiss Epic. I am notoriously bad at resting, so I’m making a concerted effort to take a breather this year – somewhere in the neighborhood of 1-2 weeks. Then I’ll start gently building back into things to get stronger for next year!

CP: with 2.5 months off mid season I wanted more end of season goals. I’m excited to race the Epic Rides event in Arkansas as well as Iceman and cross nationals. November is my favourite month to take a break as it’s not quite ski season but riding weather can be not the best, but I will also take an easy week now to recover from Swiss epic and spend time at home but then it will be back at it!