When Sultana Frizell didn't qualify for the IAAF world championships in London, the track and field athlete didn't want to sit around and pout about it.

Instead, the two-time Olympian started practising with hammers in the backyard of her family's farm in Perth, Ont., in preparation for the 38th annual New Brunswick Highland Games Festival in Fredericton this weekend.

Frizell will take part in the women's heavy athletic events.

Although she's used to competing in the hammer throw at track meets, she's had to spend some time learning about the Scottish events, with help from YouTube.

"I basically go out there with the cows and throw things with them," said the 32-year-old, holder of the hammer throw record at the Commonwealth Games.

"Why sit at home when you can wear a skirt and throw?" Frizell said in an interview on her way to New Brunswick from Perth, which is between Ottawa and Toronto.

Frizell has invested years in track and field and competed in both the London and Beijing Olympics in 2012 and 2008.

In 2014, she broke the Canadian record with a throw of 75.73 metres. That year she also won her second straight gold medal at the Commonwealth Games. 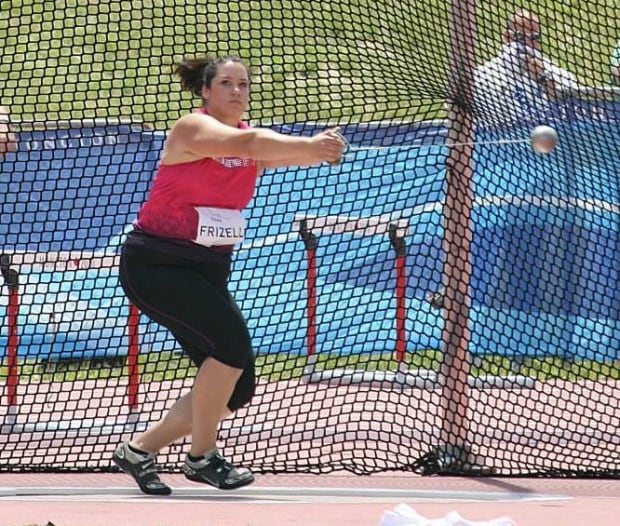 This is the first of many Highland games Frizell plans to attend this summer to compete in women's heavy athletic events, which include the hammer toss. (Facebbook)

But the athlete described 2017 as a bad throwing year and wanted to try something new.

"I love the hammer, but the hammer doesn't love me, so basically the door shut," said Frizell, who started competing when she was three.

'We're not waiting in the shallow end, we're just jumping in.' -Sultana Frizell

She spent some time Googling the Highland games events closest to her hometown and stumbled upon the one in Fredericton.

She called organizers to see if she could land a spot in the heavy athletic events.

"Fredericton is this wonderful, happy place that basically said, 'Hey Sultana, you  totally can come play with us and we will show you how to throw these things,'" said Frizell, who competed at one of her first track events in Fredericton when she was a kid.

Frizell has always had an interest in competing in Highland games but has never had the time.

"I used to throw shot put, so I should be OK with throwing a stone around," she said.

She said many athletes who retire from track and field will turn to heavy athletic sports with the Highland games.

"I'm very new to this," she said. "We're not wading in the shallow end, we're just jumping in."

In August, she will also participate in the Glasgow Highland Games and the Bute Highlands Games in Scotland.

And she's already setting new goals for herself.

"I really want to make the world Highland games championships," she said.

What to expect at games

The Fredericton festival runs from July 28 to July 30 on the lawns of Government House at 51 Woodstock Rd., which organizers say resembles an old Scottish castle. 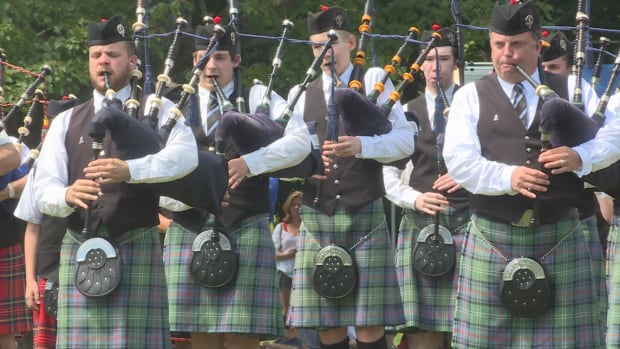 "Everybody thinks that because it's the Highland games and there's bagpipes and there's haggis, you have to be Scottish … there's a lot more to it than that," said Chris Gallant, co-chair of the New Brunswick Highland Games committee.

The weekend event includes bagpiping, highland dancing and a variety of workshops such as a whisky-tasting workshop and an introduction to Scottish Gaelic.

Another highlight will be the workshop on haggis, a Scottish dish made of sheep's liver, heart and lungs that's mixed in the animal's stomach. People can learn about the history of the traditional dish, how to make, and old tales surrounding it. 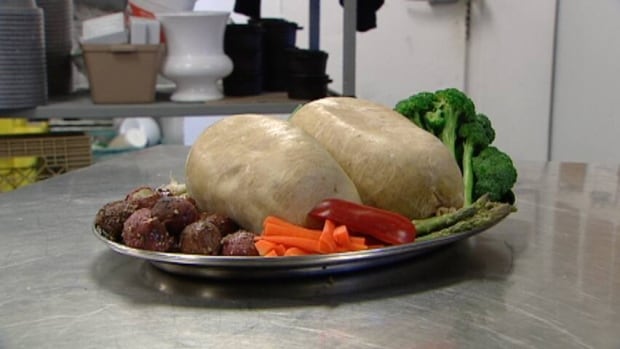 The festival is offering a haggis workshop, where visitors can sample the Scottish dish.

The workshop will take place at 3 p.m. Saturday and everyone is welcome.

"Once you taste it, that usually wins people over," MacKinnon said.

The games will open Friday at 7:30 p.m., honouring the 90th anniversary of the Fredericton Society of Saint Andrew Pipe Band.

The event is expected to attract thousands of people, including competitors and performers from across Canada, the United States and Scotland.

"There's so much to see and do," Gallant said. "Anybody can be Scottish for the weekend."